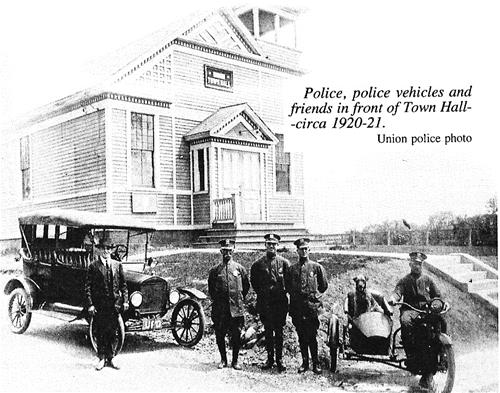 From 1912 to 1920 no official Police Department was designated, although Chief Hopkins used his residence from time to time to take care of the prisoners. The unofficial department consisted of 4 men. The first Police Headquarters was located at 979 West Chestnut Street, opposite Fairway Drive. Transportation at this point included the automobile and motorcycle. On September 14, 1929, the Police Department was placed on a 10-hour day platoon basis. In May 1929, the department changed to an 8-hour schedule, and in 1930 obtained fingerprinting equipment. The automobiles of the Police Department were equipped with sirens and fire extinguishers in May 1931. Plainclothesmen were first assigned to investigate work on June 13, 1933.

In 1929, the John C. Price Building was moved to 1930 Morris Avenue and converted into a 2-family house. The Union Police Department occupied the first floor. In 1935 a farmhouse at 981 Caldwell Avenue became the Police Headquarters. The old house and land was purchased by the Township at a cost of $18,000 under the terms of an ordinance adopted in August 1950. By 1958 the department had 2 ambulances with radios, 1 police rescue service truck, 2 detective cars, 1 utility car, 5 patrol cars, 5 motorcycles and a manpower of 52 officers. In 1978, an addition was added to the police department, creating the Police Department and Municipal Court Complex that we see today. In 1999, a third level was added to house the Communications/Dispatch function of the department.